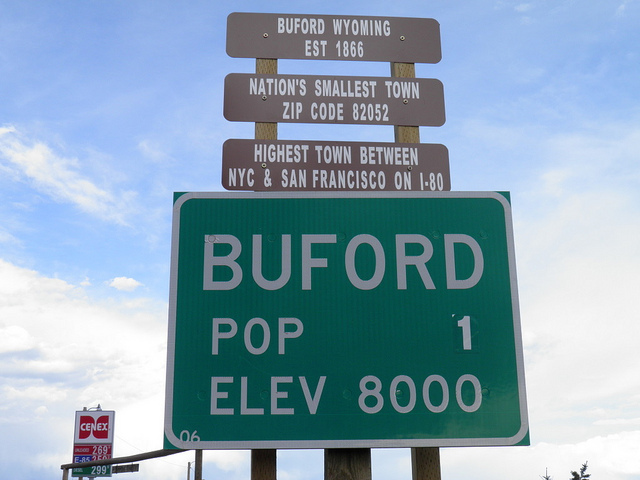 Packing Up, Moving On and Selling the Town

DENVER — For years, Don Sammons was the biggest shot in Buford. He owned everything. The gas station, the trading post, the cafe. Needed anything while passing through town? Mr. Sammons was the man to talk to.

In fact, he was the only man you could talk to, being the sole resident of Buford, all 10 acres of it, a windswept Wyoming outpost just off Interstate 80 between Cheyenne and Laramie.

Billing itself as the nation’s smallest town, unincorporated Buford went to auction on Thursday after Mr. Sammons decided to move on after two decades of living here. The sale drew interest from people around the world who dreamed of owning a bucolic American town on the edge of the frontier.

The auction itself lasted less than 15 minutes before a mysterious Vietnamese man offered a winning bid of $900,000 for Buford, which has been around since the mid-1800s and was once a railroad town with a population of about 2,000.

“We’ve auctioned off all types of properties of all shapes and sizes and purposes,” said Amy Bates, chief marketing officer for Williams & Williams, a real estate auction company based in Tulsa, Okla. “But we’d never auctioned off a town.”

Mr. Sammons, 61, moved here from Newport Beach, Calif., in the ’80s along with his wife, searching for someplace quieter. After his wife died, he bought Buford in 1992 for $155,000 from a family who hailed from New Jersey.

He replaced the gas pumps, used the old school house as an office and rebuilt the trading post, turning Buford into a popular way station for travelers. In 2006, his son moved out, and Mr. Sammons became Buford’s only resident.

“People always ask me, ‘Didn’t you get lonely?’ ” he said. “But there’s a big difference between being lonely and being alone. There are people in New York City, who have millions of people around them, and they might feel very lonely.”

In reality, Buford was not so lonely. More than a thousand people would stop by each day. The pumps stayed open 24 hours, but by nightfall the traffic died down.

After work, Mr. Sammons would often stroll over to his house for dinner, before sitting on his porch, where the view of the mountains shooting up over the plains and the soft whisper from passing cars made the day’s end especially peaceful.

Recently, though, Mr. Sammons had started feeling his work here was done.

“I was kind of hoping my son might want to carry it on,” he said. “But he explained to me that it just isn’t his thing. And I certainly understand that.”

The new owner, a man from Ho Chi Minh City, had flown in from Vietnam for the auction. His broker, Rozetta Weston, said he wished to remain anonymous and was not available for comment. It was unclear what the man had in store for Buford.

In a statement issued through Ms. Weston, the man said, “Owning a piece of property in the U.S. has been my dream.” He added: “So, I decided to make a trip to Wyoming, to bid on-site. It was a long journey but I made it at last. It is the American dream!”

In a twist of fate, Mr. Sammons served in the Army during the Vietnam War and had been to Ho Chi Minh City when it was still Saigon. These days, he tried not to think much about the war. But in some ways, selling to this man seemed right.

“I had been to his town in Vietnam, and now he’s buying my town,” Mr. Sammons mused. “We have similar interests, and we’re both Buddhists. It’s brought me full circle.”

For now, Mr. Sammons will try to get used to waking up in the new home he bought in Windsor, Colo., near his son. But he plans on visiting Buford a few times a year — if for no other reason than to see how the place is holding up.